Here is my second go at a Marlborough Bra by Norma from Orange Lingerie.

The fabric I bought as a kit from Etsy with some extra red powermesh. I fell in love with this kit because of the beautiful fun colours. It looks beautiful and I did a better job of putting it together -BUT, it was a mistake, very sadly, when will I learn not to buy fabric online!? You can just never tell what it is going to feel like or sew like, how thick it is and what the quality is like. I wish I had learnt from previous failed purchases! The fabric, I have no idea exactly what it was, but the machine just wouldn’t go through it, I tried every different needle and thread and I just had skipped stitches everywhere! It was a little like a very thick swimsuit fabric. Generally speaking my machine rebels against knits a little anyway.

The general fit of the cups was much better, I changed the pattern pieces for the top and the bottom of the cup, on the bottom I widened the angle between the two base sides, and then lengthened the top piece accordingly. This slightly helped the pointy shape, I’m more of a round shape, and just gave a little more room in the cup. 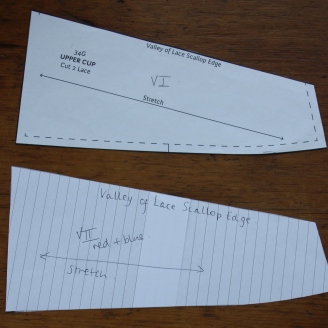 This worked very well but I  will just angle the left hand edge of the top cut in a little next time as the top of the cup didn’t need to be wider really.

The kit didn’t come with a matching bow and as I bought the kit just after Christmas there was no red bows to be found, so I settled for making my own, I think the double colour adds something though.

I also lined the cup this time and the extra support from that was really great and made the insides much neater though I still left one seem unfinished this time. I used a tutorial from Miss Maddy Sews. 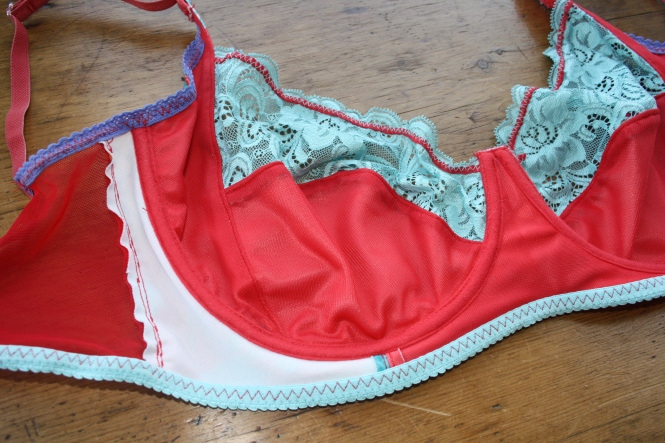 One of the issues with the kit I bought was that the elastics were fairly poor quality, the band looks fine here but after a couple of wears it stretched badly and didn’t give me the required support I needed, At some point when I can face it I need to take this elastic off and put on a new band and this bra will be sooo much better but at the moment I can’t face unpicking my hard work.

I changed the strap placement at the back of the bra by extending the top of the wing as you can see here, leaving the rest of it the same size and that definitely helped the comfort. 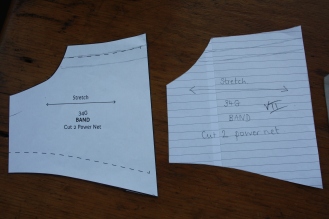 I was going to make matching knickers for this one, but after finding out that the band needs changing I’ve decided to hold out until the next one. A good sew just a shame about the kit I bought, I will learn. Honest.

One thought on “Marlborough II”